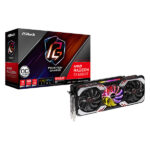 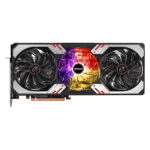 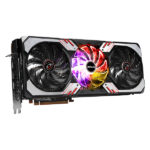 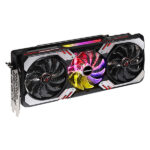 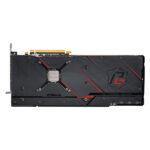 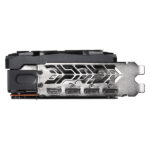 OC Edition
Great Performance.
Delivers great performance which is more higher than reference cards based on the solid hardware design.

Phantom Gaming 3X Cooling System
For Cool and Silent.
Crafted for the best balance between the thermal efficiency and silence by all the details.

Striped Axial Fan
Designed For Enhanced Airflow.
ASRock’s custom Striped Axial Fan delivers enhanced airflow to optimize cooling from not only the stripe structure on each fan blade but also the polishing surface on the bottom side.

Air Deflecting Fin
Guide Airflow to Go Through Regularly & Quickly.
Guide the airflow to go more regularly and quickly to enhance the cooling efficiency by the V-shaped cutting fins and the V-shaped air vents.

Ultra-fit Heatpipe
Consolidated to Maximize the Contact.
The heatpipes are consolidated to maximize the contact among each others and also the GPU baseplate for the optimized heat dissipation.

Nickel-plated Copper Base
Maximize GPU Contact Area.
With premium copper base heatsink design, the direct contact area to the GPU would be maximized to improve thermal transfer effectively.

LED On/Off Switch
On or Off? Switch as You Want.
You can switch not only the built-in ARGB LEDs but also the ARGB LEDs equipping with the connected strips/devices at once.

8K Resolution Support
Not only can it handles 4K graphics but also supports the next generation 8K video output for the ultimate visual experience.

One Gaming DNA for PCs and Consoles
AMD RDNA™ 2 architecture is the foundation of next-generation gaming PCs and consoles. It is the bedrock of the upcoming revolution in PC gaming graphics and cloud gaming. AMD RDNA™ 2 elevates and unifies visual effects and gameplay across multi-gaming platforms, like no other graphics architecture before