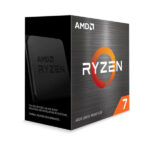 AMD Ryzen 7 5800X3D The “Zen 3” architecture represents the most comprehensive design overhaul of the “Zen” era. Over 20 major changes include: wider and more flexible execution resources; significantly more load/store bandwidth to feed execution; and a streamlined front-end to get more threads in flight—and do it faster.