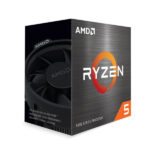 Debuting in AMD Ryzen™ 5000 Series desktop processors, the “Zen 3” architecture is a ground-up redesign of the legendary “Zen” family. Equipped with end-to-end design enhancements, “Zen 3” embodies AMD’s relentless focus on single-core performance, energy efficiency, and reduced latencies. It’s at the core of the best gaming processors in the world.

The “Zen 3” architecture represents the most comprehensive design overhaul of the “Zen” era. Over 20 major changes include: wider and more flexible execution resources; significantly more load/store bandwidth to feed execution; and a streamlined front-end to get more threads in flight—and do it faster.