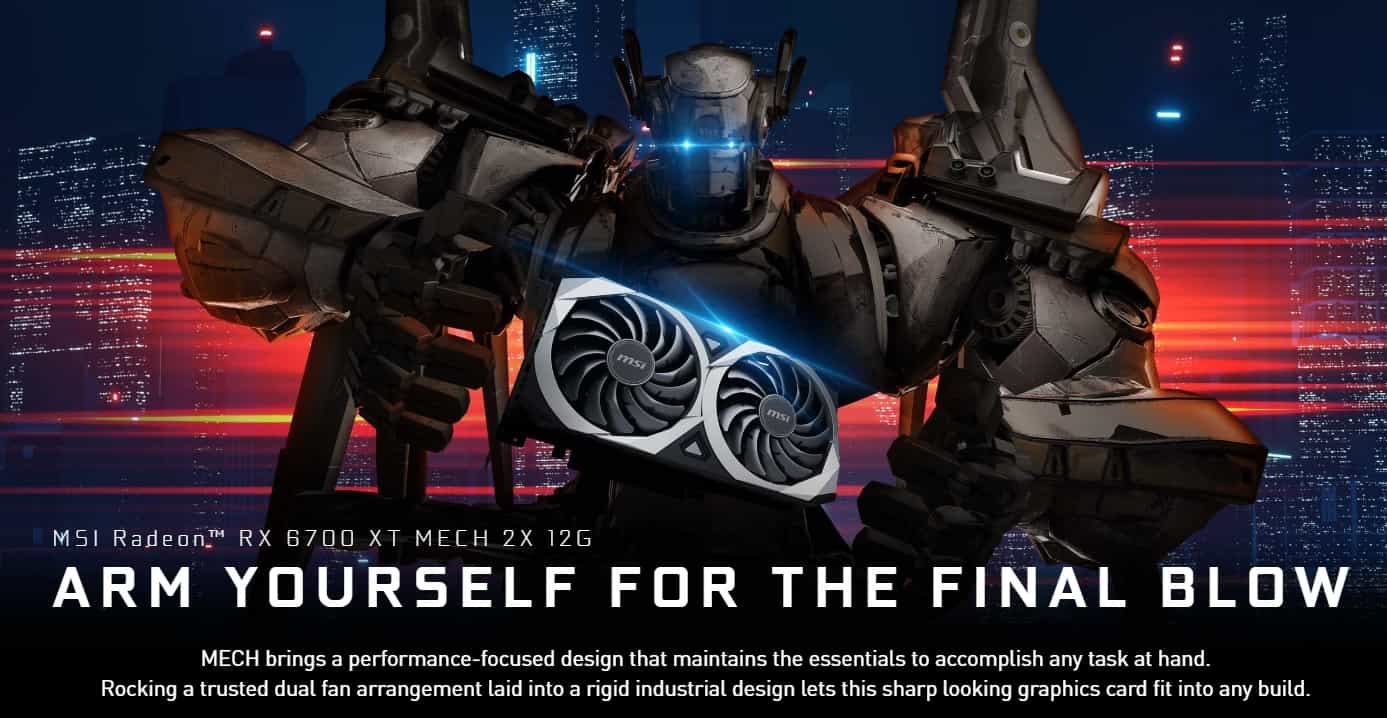 ARM YOURSELF FOR THE FINAL BLOW
MSI Radeon RX 6700 XT MECH 2X 12GB brings a performance-focused design that maintains the essentials to accomplish any task at hand.
Rocking a trusted dual fan arrangement laid into a rigid industrial design lets this sharp looking graphics card fit into any build.

BACKPLATE
A clean-looking brushed-finish backplate reinforces the length of the card.

CHILLINGLY SILENT
Zero Frozr is the calm before the storm. The fans completely stop when temperatures are relatively low, eliminating all- noise when active cooling is unneeded. The fans will automatically start spinning- again when the heat is on during gaming.

TOUGH ENOUGH TO BACK YOU UP!
MECH has been crafted to serve you well during intense gameplay. MSI Radeon RX 6700 XT MECH 2X 12GB legendary item has extra power unlocked through the Custom PCB.

TRACES OF BRILLIANCE
TAILORED PCB DESIGN
Not all circuit boards are created equal. A custom PCB Design provides greater reliability and beefed up power circuitry for pushing the card to its limits.

Elevated Experiences
Level up to ultimate responsiveness and smooth gaming with low-latency gaming technology from AMD Radeon™ Anti-Lag and AMD Radeon™ Boost. 1, 2 Enhance your gaming experience with the latest HDMI™ 2.1 VRR technology, with over 1300 AMD FreeSync™ gaming displays3 to choose from, and support for motherboards with PCIe® 4.0 technology.

One Gaming DNA for PCs and Consoles
AMD RDNA™ 2 architecture is the foundation of next-generation gaming PCs and consoles. It is the bedrock of the revolution in PC gaming graphics and cloud gaming. AMD RDNA™ 2 elevates and unifies visual effects and gameplay across multi-gaming platforms, like no other graphics architecture before.