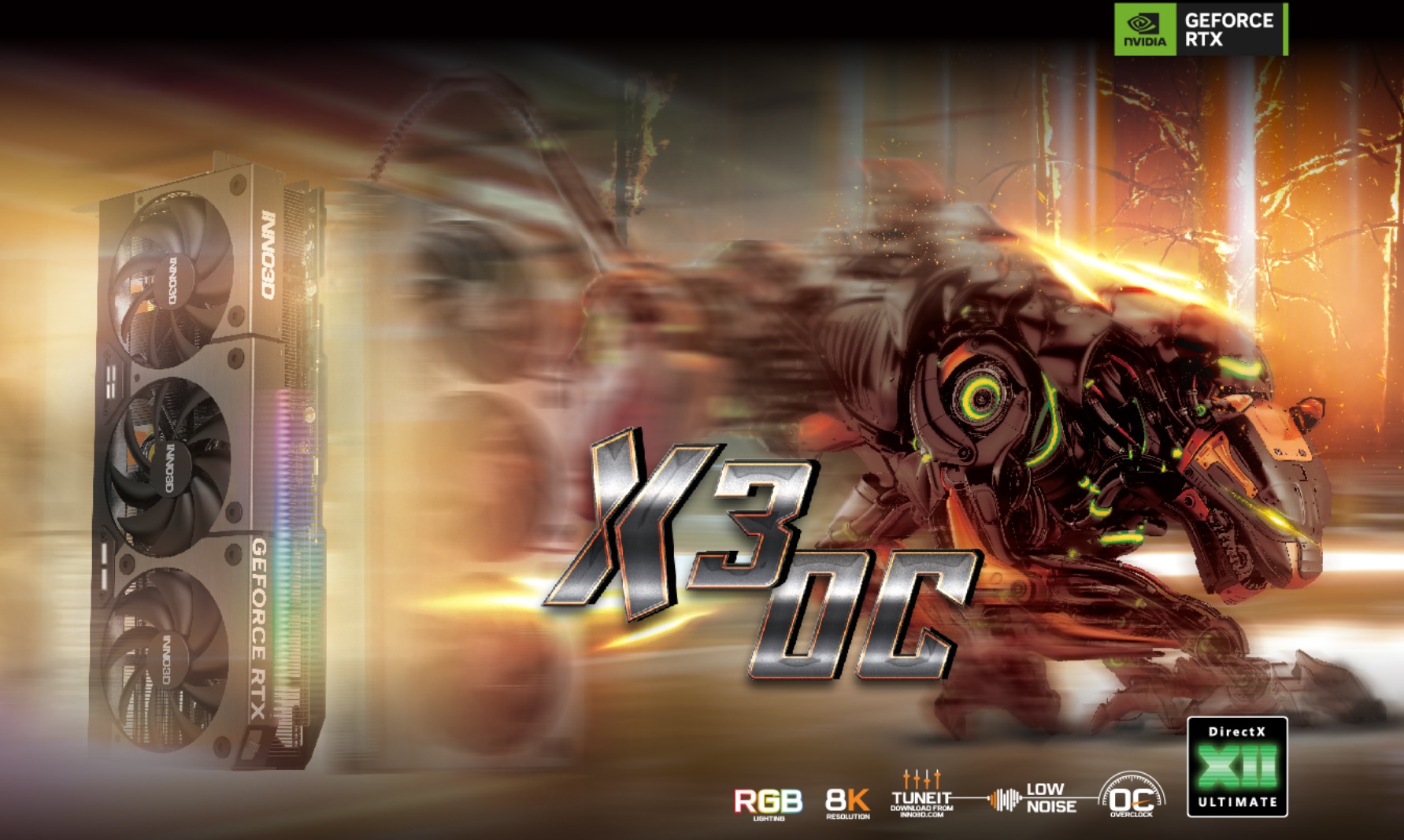 Powered by the new ultra-efficient NVIDIA Ada Lovelace architecture, the 3rd generation of RTX, Inno3d RTX 4080 16GB X3 OC graphics cards are beyond fast, giving gamers and creators a quantum leap in performance, neural rendering, and many more leading platform capabilities. This massive advancement in GPU technology is the gateway to the most immersive gaming experiences, incredible Al features and the fastest content creation workflows. These GPUs push state-of-the-art graphics into the future.

The Ada architecture unleashes the full glory of ray tracing, which simulates how light behaves in the real world With the power of RTX 40 Series and third-gen RT Cores, you can experience incredibly detailed virtual worlds like never before.

The performance multiplier, powered by Al

Top tools for the creative trade

Your ideas, accelerated by NVIDIA Studio.

The NVIDIA Broadcast app transforms any room into a home studio-taking your live streams, voice chats, and video calls to the next level with powerful Al effects like noise and room echo removal, virtual background, and more.

Connect your creative worlds to a universe of possibility.

NVIDIA Omniverse is a 3D design collaboration platform within the NVIDIA Studio suite of tools for creators. Built to accelerate workflows and unite apps and assets to bring your ideas to life- fast.

The app that puts the Al in painting.

Use Al to turn simple brushstrokes into realistic landscape images. Create backgrounds quickly, or speed up your concept exploration so you can spend more time visualizing ideas.

GeForce Game Ready Drivers deliver the best experience for your favorite games. They’re finely tuned in collaboration with developers and extensively tested across thousands of hardware configurations for maximum performance and reliability.

Capture and share videos, screenshots, and live streams with friends. Keep your drivers up to date and optimize your game settings. GeForce Experience lets you do it all. It’s the essential companion to your GeForce graphics card.

Get smooth, tear-free gameplay at high refresh rates, plus HDR and more. This is the ultimate gaming display and the go-to equipment for enthusiast gamers.

Turn your screenshots into art with this powerful in-game photo mode that captures 360, HDR, and super- resolution photos.

Resizable BAR is an advanced PCI Express feature that enables the CPU to access the entire GPU frame buffer at once, improving performance in many games.