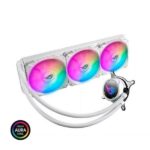 With four-pin PWM control for both the pump and radiator fans, ROG Strix LC Series​ delivers precise speed control for the perfect balance of performance and acoustics in every scenario.

ROG Strix LC series is compatible with a wide range of Intel and AMD motherboard platforms, giving you the flexibility to pair it with your choice of processor. It also comes fitted with 38cm of tubing to make mounting and routing easier.