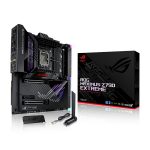 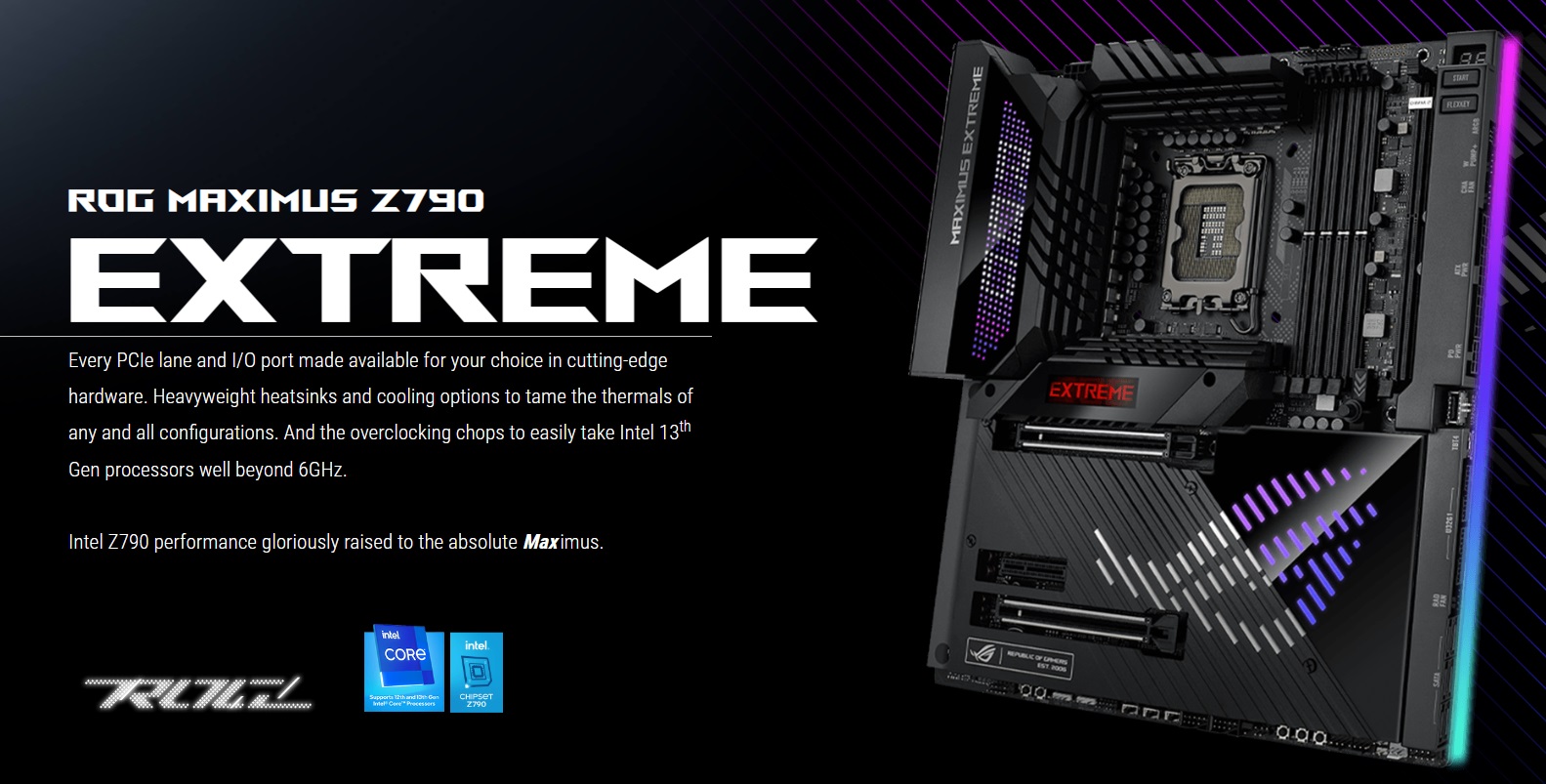 ROG OVERCLOCKING TECHNOLOGIES
Performance optimization made accessible for new recruits and thoroughly scalable for seasoned veterans – the Asus ROG Maximus Z790 Extreme gives you it all with complete control. Engage onboard intelligence to automatically adapt CPU performance or get a headstart on manual tuning, and then utilize advanced tools and utilities to stay on the pulse and push boundaries.

MEMORY
Comprehensive memory tuning options are the cornerstone of ROG motherboards. With the Asus ROG Maximus Z790 Extreme, you can extract all of the potential out of your DDR5 modules, regardless of if they’re from an extreme-speed kit or an entry-level set that would otherwise be locked

Multiple temperature sources
Each header can be set to monitor and react to three user-configurable thermal sensors for workload-based cooling, and all settings can be easily managed by Fan Xpert 4 or UEFI.

ROG WATER-COOLING ZONE
Dual water-temperature headers and a flow-rate header feed information straight into Armoury Crate, allowing you to track coolant temperatures and the flow rate of the entire loop.

Water pump+
A dedicated header can supply over 3 amps to a high-performance PWM or DC water pumps.

Water in/out
A dedicated header enables monitoring of temperatures at the input/output points of any component.

ROG FAN CONTROLLER
The ROG Fan Controller offers an additional six headers that can be controlled via FanXpert 4. The card features two temperature-sensor headers, along with two thermistors that can be attached to various components. There are also six ARGB headers to illuminate ARGB fans.

COOLER COMPATIBILITY
The Asus ROG Maximus Z790 Extreme bears the same LGA 1700 socket as the Z690 models, so it is backward compatible with all coolers that supported the previous generation, including all AIO offerings from ASUS and ROG.

CONNECTIVITY
Take system bandwidth to the extreme with future-ready ports for graphics, storage, and peripherals, and light up network connections with ultraspeed WIFI and Ethernet. Plug in to your heart’s content and then get deeper into the game with high-fidelity onboard audio.

TWO THUNDERBOLT 4 TYPE-C® PORTS
Each port delivers up to 40 Gbps of bidirectional bandwidth for the latest super-speed devices and drives. Both ports can be employed for up to two external 4K displays, and PCIe bandwidth extends to up to 32 Gbps.

WIFI 6E
Onboard WiFi takes advantage of the 6 GHz band for lower latency in dense wireless environments and wide 160 MHz channels to speed up data transfers. For an even more seamless experience, the 5 or 6 GHz band can connect simultaneously alongside the 2.4 GHz band courtesy of Intel® Double Connect Technology.

WiFi 6E logo 10G ETHERNET
Meeting the demands of power users and content creators, onboard Marvell® AQtion 10 Gbps Ethernet provides a new level of home networking. With virtually boundless throughput, file transfers and system backups are faster than ever before.

UEFI BIOS
The renowned ROG UEFI (BIOS) provides everything you need to configure, tweak, and tune your rig. It offers intelligently simplified options for newcomers to PC DIY, as well as more comprehensive features for seasoned veterans.

PERSONALIZATION
Uniquely you. Customizable lighting and onboard displays allow you to subtly accent system components or boldly cast a unified theme through your build.

ANIME MATRIX™ LED DISPLAY
This innovative display features an RGB grid of mini LEDs that can be programmed with custom lighting designs and unique animations. For added immersion, sound-triggered effects can be selected to add visualizations to live audio or even pulse to the rhythm of a person’s voice.

GROW YOUR GAMING WORLD WITH AURA SYNC
Up your game with complementary Aura Sync enhanced aesthetics, featuring preset lighting effects that can be easily synchronized across compatible ROG graphics cards, monitors, keyboards, and mice to give your setup a unified look.

LIVEDASH COLOR OLED
The Asus ROG Maximus Z790 Extreme includes LiveDash, a built-in 2-inch color OLED panel that adds life and flavor to the center of your rig. During startup, the display shows traditional POST codes to help with monitoring and troubleshooting, and while the system is running it can be programmed to show system metrics, such as CPU frequency and temperature. But if you want to add a personal touch, the default GIF can be replaced with a custom image or animation.

APP-SPECIFIC PROFILES
Apply customized audio settings to different applications, so everything you do is perfectly tuned to the way you want to listen.

ARMOURY CRATE
Armoury Crate is a software utility designed to give you centralized control of supported gaming products, making it easy to tune the look and feel of your system. From a single intuitive interface, Armoury Crate helps you customize RGB lighting and effects for compatible devices and synchronize them with Aura Sync to create a unified lighting scheme across your system. In addition, Armoury Crate’s Fan Xpert4 tool provides comprehensive control over fans, water pumps, and all-in-one (AIO) coolers.

AIDA64 EXTREME
The Asus ROG Maximus Z790 Extreme includes a one-year AIDA64 Extreme subscription, a tool that provides detailed information about hardware and software, as well as benchmarks to measure the performance of the entire system or individual components. AIDA64 Extreme includes a monitoring and diagnostics feature to detect and prevent hardware issues. All vital system sensors can be tracked in real time, allowing voltage readings, fan speeds, and temperature information to be displayed on the desktop or sent to dedicated displays or to the LCD panels of ROG AIO liquid coolers*.