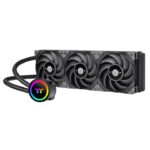 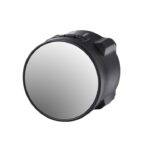 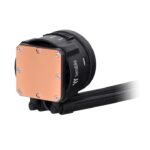 Thermaltake TOUGHLIQUID 360 ARGB Sync AIO Cooler is a TOUGHFAN 12 equipped all-in-one liquid cooler with a rotational cap that has 6 LEDs, which can be controlled by both built-in controller and 5V RGB compatible motherboards.

Thermaltake TOUGHLIQUID 360 ARGB features a rotational cap that allows users to rotate the cap easily even after installation, so the TT logo faces the right direction to present the overall aesthetic of the build.

The mirror-finished water block is designed with a built-in controller, which grants easy control of the water block’s lighting mode, speed, and color, creating effortless cable management while enjoying the lighting effects with direct access.

*The controller is built-in the high performance waterblock