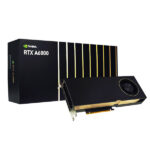 Second-Generation RT Cores
With up to 2X the throughput over the previous generation and the ability to concurrently run ray tracing with either shading or denoising capabilities, second-generation RT Cores deliver massive speedups for workloads like photorealistic rendering of movie content, architectural design evaluations, and virtual prototyping of product designs. This technology also speeds up the rendering of ray-traced motion blur for faster results with greater visual accuracy.

Power Efficiency
Featuring a dual-slot, power efficient design, the Nvidia Quadro RTX A6000 48GB is up to 2X more power efficient than Turing GPUs and crafted to fit into a wide range of workstations from worldwide OEM vendors.

*Virtualization support for the Nvidia Quadro RTX A6000 48GB GPU will be available in an upcoming NVIDIA virtual GPU (vGPU) release.