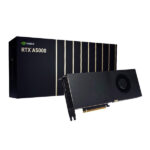 The Nvidia Quadro RTX A5000 24GB delivers the power, performance, capabilities, and reliability professionals need to bring their boldest ideas to life.
Built on the NVIDIA Ampere architecture, the Nvidia Quadro RTX A5000 24GB combines 64 second-generation RT Cores, 256 third-generation Tensor Cores, and 8,192 CUDA® cores with 24 GB of graphics memory to supercharge rendering, AI, graphics, and compute tasks.
Connect two Nvidia Quadro RTX A5000 24GB with NVIDIA NVLink to scale memory and performance with multi-GPU configurations , allowing professionals to work with memory intensive tasks such as large models, ultra-high resolution rendering, and complex compute workloads.
Support for NVIDIA virtual GPU software increases the versatility for enterprise deployments.
Nvidia Quadro RTX A5000 24GB professional graphics cards are certified with a broad range of professional applications, tested by leading independent software vendors (ISVs) and workstation manufacturers, and backed by a global team of support specialists.
Get the peace of mind needed to focus on what matters with the premier visual computing solution for mission-critical business.