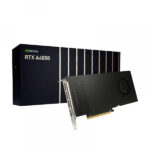 The Nvidia Quadro RTX A4000 16GB is the most powerful single-slot GPU for professionals, delivering real-time ray tracing, AI-accelerated compute, and high-performance graphics to your desktop.
Built on the NVIDIA Ampere architecture, the Nvidia Quadro RTX A4000 16GB combines 48 second-generation RT Cores, 192 third-generation Tensor Cores, and 6,144 CUDA® cores with 16 GB of graphics memory with error-correction code (ECC) so you can innovate with uncompromised computing accuracy and reliability.
The Nvidia Quadro RTX A4000 16GB also features a power-efficient, single-slot PCIe form factor that fits into a wide range of workstation chassis, so you can do exceptional work without limits.
NVIDIA RTX professional graphics cards are certified with a broad range of professional applications, tested by leading independent software vendors (ISVs) and workstation manufacturers, and backed by a global team of support specialists.
Get the peace of mind needed to focus on what matters with the premier visual computing solution for mission-critical business.

Nvidia Quadro RTX A4000 16GB of GPU Memory
Drive graphics and compute intensive workflows with 16 GB of GDDR6 memory with ECC, twice the memory size of the previous generation.