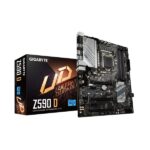 GIGABYTE Ultra Durable Motherboards are focused on delivering M.2 technology to enthusiasts who want to maximize their Systems’ potential.

With Z590 D Motherboard will support either 5v or 12v Addressable LED lighting strips and up to 300 LED lights. RGB Fusion 2.0 with Addressable LEDs comes with new patterns and various speed settings with more to come.

The BIOS is essential for users during initial setup to allow for the most optimal settings. With a new GUI and easier to use functionalities, GIGABYTE has been able to reinvent the BIOS to give users a better experience while setting up their new system. * Photos are for reference only. Product features may vary by model.