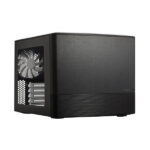 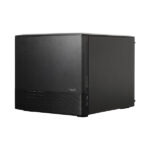 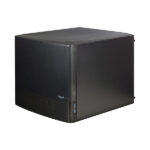 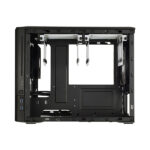 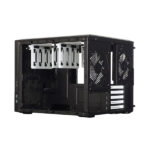 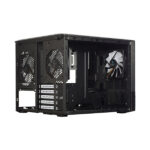 Take advantage of a configurable cooling design with the windowed Fractal Design Node 804 Micro-ATX Computer Case in black from Fractal Design. Intended to provide ample room for components while delivering plenty of airflow, this case uses a dual-chamber design and supports micro-ATX and mini-ITX motherboards. In addition to room for a slim optical disk drive, this case can accommodate up to twelve drives, including ten 3.5 and two 2.5″ drives, or eight 3.5 and four 2.5″ drives. There are also five expansion slots for adapter cards, including GPUs up to 12.6″ long. However, if a fan is installed in the lower front of the case, GPU size is limited to 11.42″. Users can install ATX power supplies up to 10.24″, while CPU coolers up to 6.3″ are also supported.

The Fractal Node 804 comes with three preinstalled 120mm Silent Series R2 fans, with one at the front and two at the back. Users can install up to three additional fans on the front of the case and up to four fans on the top for increased airflow. A fan controller integrated into the back of the case controls up to three fans at once, and filters at the front, top, and bottom of the case help keep dust out. And, thanks to support for water cooling systems, users can replace the fans with radiators, too. Users can install 240mm radiators up to 10.94″ tall at the front of the case, either on the left or right side. Either 240 or 280mm radiators can be installed at the top right of the case, and can measure up to 5.12″ thick if the drive bays are removed or placed elsewhere. The right side of the top panel fits radiators up to 280mm. The left side of the top panel also fits 240mm radiators up to 5.12″. However, when a 240mm radiator is placed on the left side of the top panel, RAM modules on the motherboard are limited to 1.89″ tall. The rear panel can also accept 120mm radiators on the right and left side simultaneously, though fitting one to the left side requires removing a drive bay or relocating it. The maximum amount of radiators that can be installed at once includes one 240, one 280, and two 120mm radiators.

Sporting a windowed left-side panel, the Fractal Design Node 804 allows you to show off your components. Intended to provide a minimalist look, the front panel is constructed from brushed aluminum. This front panel incorporates two USB 3.1 Gen 1 Type-A ports, as well as separate 3.5mm audio input and output ports. A power button and power and HDD activity LEDs are also present. The Fractal Node 804 comes with touch-fastener straps for easy cable management.

The dual chamber layout in the Fractal Design Node 804 separates hot running components from the cooler ones and allows for unrestricted airflow over the motherboard, processor and graphics card.