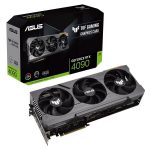 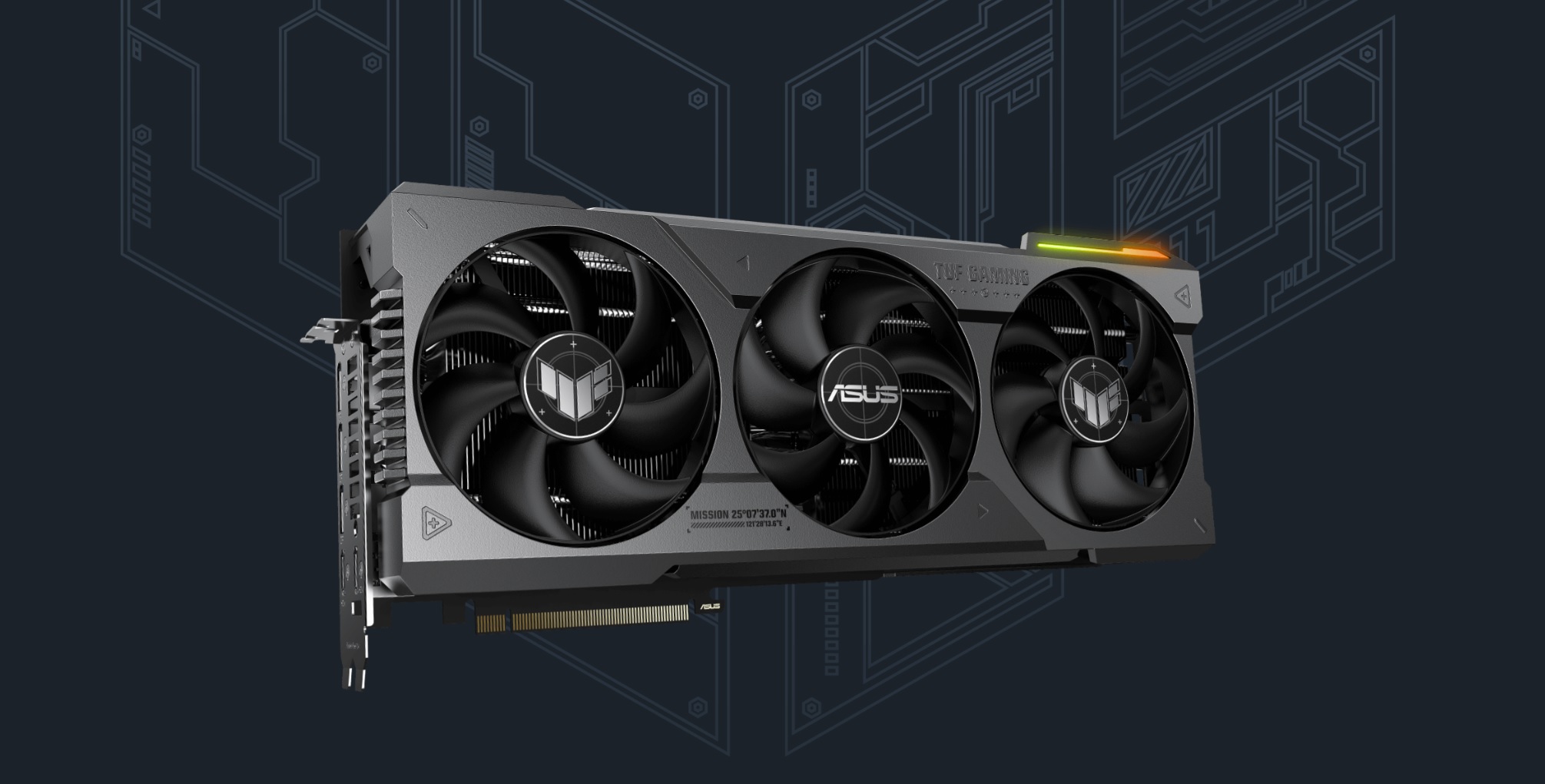 ASUS TUF Gaming GeForce RTX® 4090 24GB GDDR6X optimized inside and out for lower temps and durability.

NVIDIA Ada Lovelace architecture elevated by buffed cooling and power delivery, and backed with an arsenal of rugged reinforcements to cover your six. Lock, load, and dominate with the TUF Gaming GeForce RTX® 4090.

Air Superiority
Bigger and better. Axial-tech fans spin on dual-ball bearings and have been scaled up to propel 23% more air through the card, setting the stage for lower temperatures, less noise, and higher performance.

Well-maintained Formation
The two side fans spin counterclockwise to minimize turbulence and maximize air dispersion through the heatsink. All three fans come to a standstill when GPU temps are below 50 Celsius, letting you play less-demanding games or perform light tasks in relative silence. Fans start up again when temps are over 55 Celsius, referencing a speed curve that balances performance and acoustics for work or play.

Phase That Blaze
A vapor chamber and generously sized heatsink combo efficiently soak up heat from the GeForce RTX 4090 GPU so that it can be whisked away by the three Axial-tech fans.

Resilient Squadron
A lineup of capacitors rated to last 20,000 hours at 105 Celsius brings higher temperature and ripple tolerance to the GPU power rail, arming the card for long-term deployment in challenging conditions.

Power and Purge
Component and trace layouts have been optimized onto short PCB to reduce power losses and let heat escape through a massive backplate vent.

The GeForce RTX 4090 gloriously presented on a backdrop of low noise and rugged durability.

RELIABILITY BOOST
Auto-Extreme Technology is an automated manufacturing process that sets new standards in the industry by allowing all soldering to be completed in a single pass. This reduces thermal strain on components and avoids the use of harsh cleaning chemicals, resulting in less environmental impact, lower manufacturing power consumption, and a more reliable product overall.

Light ‘em Up!
Aura-compatible ARGB lighting on the shroud adds a dash of customizable color or functional effects to your build. Pair up with a vast range of compatible system components and coordinate the glow to create a theme that’s uniquely you.

Pillar of Support
The bundled graphics card holder banishes sag and also contains a screwdriver to help you build.

ASUS GPU Tweak III is more intuitive and feature-rich than ever before. A revamped interface offers greater accessibility by integrating core functions into a centralized dashboard, and our Voltage-Frequency tuner has been overhauled to make overclocking even easier. Additional goodies like 0dB fan technology, automatic profile swapping, a fully customizable on-screen display, and logging capabilities ensure that you get the most out of your graphics card.

QuantumCloud is a safe and easy-to-use application that lets you effortlessly earn extra money by sharing your graphics card’s computing power. Earnings are accessible through your PayPal or WeChat account, and QuantumCloud also supports multiple exchange methods, including Steam. In addition, QuantumCloud doesn’t collect any personal data, so your privacy stays protected. Get started right away with just one click!

Pair with a PSU

Check out our PSU landing page to learn more about how we’re pushing the industry forward and use our wattage calculator to estimate how much power you’ll need to fuel your next rig.