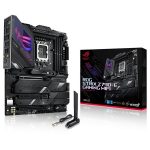 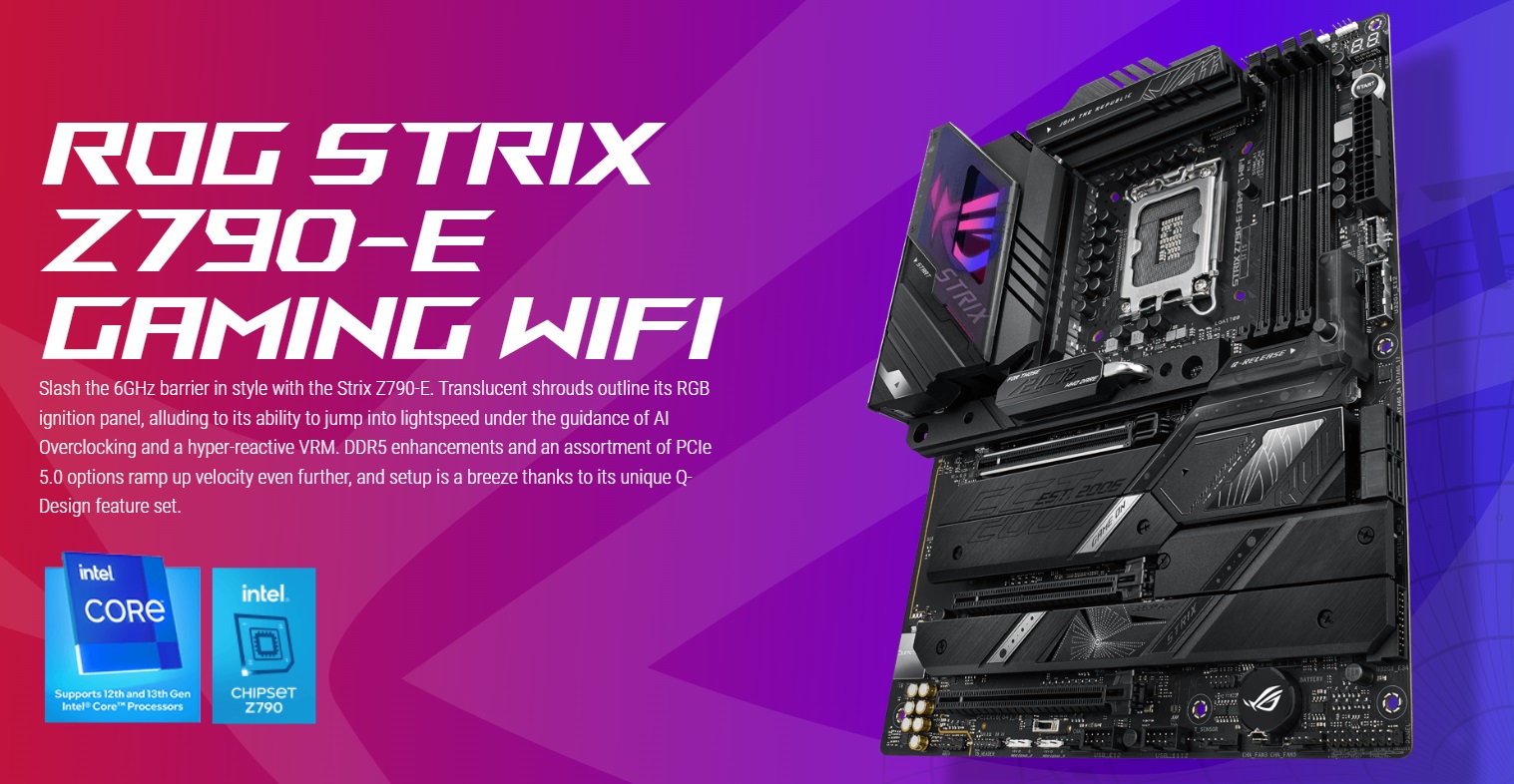 PCIE® SLOT Q-RELEASE
A physical button unlocks the first PCIe slot’s security latch with one tap, greatly simplifying the process of detaching a PCIe card from the motherboard when it’s time to upgrade to a new GPU or other compatible device.

ALL-ROUND PERFORMANCE
Every aspect of the Asus Rog Strix Z790-E Gaming Wifi is finely tuned so the processor, memory, and connected devices can run in lockstep in order to achieve breakneck speeds

AI OVERCLOCKING
Tuning is now faster and smarter than ever before. ASUS AI Overclocking profiles the CPU and cooling to predict the optimal configuration and push the system to its limits. Predicted values can be engaged automatically or used as a launching ground for further experimentation.

PCIE 5.0
Fully embracing the new standard, the Asus Rog Strix Z790-E Gaming Wifi offers end-to-end PCIe 5.0 support. The topmost x16 expansion slot is Gen 5-ready, and is protected with a SafeSlot retention bracket to bear the weight of the latest graphics cards. One of the onboard M.2 slots is geared for blistering 16 GB/s read and write speeds thanks to its PCIe 5.0 interface, while all the rest can deliver still-impressive 8 GB/s transfers. Every M.2 slot is covered with substantial heatsinks to dispatch the heat of next-gen drives.​

POWER ARCHITECTURE
18 + 1 power stages each rated to 90A deliver ample current to drive the most powerful Intel 13th Gen processors through any workload with ease.​

DDR5 DOMINATION
ROG has a long legacy of flexing the fastest memory performance, and DDR5 is no outlier. Thanks to improved signal routing, now enthusiast-grade kits have been driven far beyond the 7 GT/s mark on the Asus Rog Strix Z790-E Gaming Wifi, and who knows how far future DIMMs can go? Seasoned veterans can test their mettle by tinkering with the extensive array of tuning options in the UEFI.​

AEMP II
ASUS Enhanced Memory Profile (AEMP) is an exclusive hardware and firmware solution to overclock generic memory modules. AEMP’s second version allows for automatic tuning of kits during system startup and leverages the PCB trace optimizations of the Asus Rog Strix Z790-E Gaming Wifi to push frequencies higher than ever before. AEMP II can even overclock mixed kits in a quad-DIMM arrangement, and the vast library of support now extends to nearly every DDR5 module that does not otherwise have XMP support.

M.2 COMBO-SINK
An M.2 heatsink with a direct-contact heat pipe efficiently transfers thermal energy away from a mounted drive and into the path of chassis airflow, ensuring optimal operating temperatures.

M.2 BACKPLATE
An integrated backplate on the mid-board M.2 slot helps ensure that a high-performance PCIe 5.0 drive can deliver peak performance, even when airflow is restricted.

M.2 HEATSINKS
Heatsinks cover every slot to help keep onboard NVME SSDs at optimal temperatures for consistent performance and reliability.

Intel 2.5G Ethernet
Low-latency gaming, speedy file transfers, and high-resolution video streaming are among the many perks of onboard Intel® 2.5 Gbps Ethernet.

USB 3.2 GEN 2X2
The Asus Rog Strix Z790-E Gaming Wifi comes loaded with two USB 3.2 Gen 2×2 Type-C® connectors for speedy data transfers up to 20 Gbps. One is a port on the rear I/O; the other can be attached to the chassis front panel and it also features Power Delivery (PD) 3.0 technology to quickly charge devices up to 30W.

SUPREMEFX
ROG SupremeFX is a unique blend of hardware and software technologies that provide superior audio. The Asus Rog Strix Z790-E Gaming Wifi implementation features the ALC4080 codec for high-resolution playback up to 32-bit/384 kHz across all channels. Front-panel output is streamed through the integrated Savitech amplifier that can drive high-fidelity acoustics to a wide variety of speakers and headsets.

PLAY IN STYLE
Black PCB and heatsinks compliment most hardware, and customizable RGB lighting furthers the flexibility. Pair the Asus Rog Strix Z790-E Gaming Wifi with other products from the diverse ROG ecosystem to create a fully customized gaming setup that reflects your personal style.

UNDENIABLY ROG STRIX
Diagonal slats, brushed aluminum, and bold RGB have become hallmarks of the ROG aesthetic, and the Asus Rog Strix Z790-E Gaming Wifi bears all of them with pride. But for this generation, translucent diffusers line the I/O shroud and the Q-Release array, softly contrasting the metallic heatsinks nearby.

OUTSHINE THE COMPETITION
ROG Strix motherboards feature ASUS Aura technology, enabling full lighting control and a variety of presets for both onboard RGB LEDs and third-party accessories. Effects can be easily synced across compatible ROG graphics cards, monitors, keyboards, and mice to give your setup a unified look.

COOLER COMPATIBILITY
The Asus Rog Strix Z790-E Gaming Wifi bears the same LGA 1700 socket as the Z690 models, so it is backward compatible with all coolers that supported the previous generation, including all AIO offerings from ASUS and ROG.

THE ROG STRIX ECOSYSTEM AWAITS
Level up your game with ROG Strix. Enjoy complementary aesthetics, control, and compatibility across AIO coolers, cases, peripherals, and much more. ROG offers more choices than any other brand.

SOFTWARE UTILITIES
A myriad of ROG-exclusive tools put advanced system tuning and configuration at your fingertips.