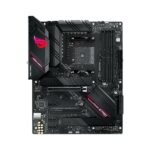 Asus ROG Strix B550-F Gaming WiFi Motherboard is PCIe® 4.0-ready and provides the latest connectivity options for supersmooth networking and blisteringly fast file transfers. Audio enhancements give you a massive advantage, allowing you to pick up on the subtlest of cues for a completely immersive gaming experience.

Play Your Own Style

Asus ROG Strix B550-F Gaming WiFi Motherboard The cyberpunk-inspired aesthetics are accentuated by the bold slashes and cybertext. By pairing your rig with other products from the diverse ROG ecosystem, you can create a fully customized gaming setup that reflects your personal style.

The patented I/O shield is finished in sleek matte black and comes pre-mounted to make it easy to install on the motherboard.

Asus ROG Strix B550-F Gaming WiFi Motherboard has Four onboard LEDs that indicate power status and any problem with the CPU, memory, graphics card, or boot device for quick diagnosis.

Asus ROG Strix B550-F Gaming WiFi Motherboard Users can place a BIOS file onto a FAT32-formatted USB drive and simply plug it into the USB BIOS FlashBack™ port and press a button to update the (UEFI) BIOS. Updates can be made even if memory or CPU isn’t present