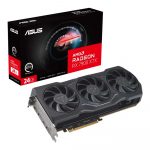 With ASUS Radeon RX 7900 XTX 24GB Graphics Card, Discover new levels of fidelity and ultra-fast gameplay with High-Performance Rendering, a combination of compute-based AMD FidelityFX™ features and upscaling technologies, to deliver world-class visuals with remarkable performance. Further immerse yourself with the AMD Radiance Display™ Engine and DisplayPort™ 2.1 to experience up to 68 billion colors at up to 8K 165Hz.

The ASUS GPU Tweak III utility takes graphics card tuning to the next level. It allows you to tweak critical parameters including GPU core clocks, memory frequency, and voltage settings, with the option to monitor everything in real-time through a customizable on-screen display. Advanced fan control is also included along with many more features to help you get the most out of your graphics card.

Pair with a PSU

Check out our PSU landing page to learn more about how we’re pushing the industry forward and use our wattage calculator to estimate how much power you’ll need to fuel your next rig.

QuantumCloud is a safe and easy-to-use application that lets you effortlessly earn extra money by sharing your graphics card’s computing power. Earnings are accessible through your PayPal or WeChat account, and QuantumCloud also supports multiple exchange methods, including Steam. In addition, QuantumCloud doesn’t collect any personal data, so your privacy stays protected. ​Get started right away with just one click!